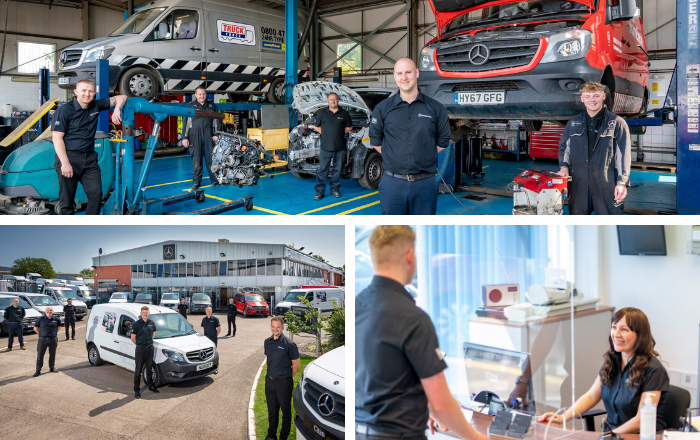 In the seven weeks following the imposition of lockdown the manufacturer’s representative in the North East sold more than 700 new and used vans, up by 116% on the corresponding period last year.

This performance is all the more remarkable when viewed against the backdrop of a 50% slump in the market for light commercial vehicles up to 3.5 tonnes GVW, in the period January to May 2020.

Prime Minister Boris Johnson announced on 23 March that people should stay at home to protect the NHS. Bell Truck and Van Managing Director Ben Sowersby and his colleagues realised that as well as the emergency services, the home delivery sector would play a critical role in serving the community during the crisis.

Crucially, though, rather than ‘battening down the hatches’ Bell also raised its van sales game. While staff undertaking administrative and other backroom roles were furloughed, Van Sales Manager Andrew Scott and his team worked throughout from their homes.

The Dealer stepped up to a seven-days-a-week sales operation and put together a number of attractive offers on Mercedes-Benz Sprinter, Vito and Citan models. These were heavily promoted by its marketing team in selected trade titles – Bell bucked the trend by substantially increasing its advertising ‘spend’ during this period – and, simultaneously, via social media and other digital marketing channels.

The result of this unconventional approach was a huge increase in the volume of enquiries received from prospective customers, which Andrew and his colleagues worked flat out to follow up. They succeeded in translating an impressively high proportion of these enquiries into sales.

Ben Sowersby recalled: “A human tragedy was unfolding before our eyes, so of course the company’s primary responsibility was to protect its people. That’s why we moved very quickly to introduce social distancing measures such as screens, and ‘mapping’ on floors, at our various locations.

“We also recognised, however, that if we’d simply shut up shop from a sales perspective a number of colleagues would have no jobs to come back to; redundancies would have been inevitable.

“Given the obvious expansion in home deliveries, and the increase in demand for vans that this would inevitably feed, we therefore resolved to attack the market digitally. This approach paid off in a big way, as orders flooded in and we very quickly found ourselves delivering vehicles all over the country.”

Ben continued: “The sales team did a magnificent job, of course, but marketing generated the leads, and the guys in the workshops pulled out all the stops to get so many pre-delivery inspections done. As is always the case at Bell, everyone has a part to play and we celebrate our successes together.”

Andrew Scott added: “I’m really proud of every member of my team, not one of whom wanted to be furloughed. Instead they put in countless extra hours, talking to prospective customers on the phone and via email, compiling digital quotations, getting finance signed-off online, and arranging for vans to be deep-cleaned then delivered.

“Their attitudes have been brilliant, because rather than wanting to take a step back they viewed lockdown as an opportunity to demonstrate their commitment not only to our customers, but also to their colleagues and the company.”

Bell Truck and Van employs 250 people at its headquarters in Longbenton, Newcastle upon Tyne, and other branches in Billingham, Spennymoor and Stockton. A founder member in 1974 of the Mercedes-Benz UK Dealer network, it was acquired in 2017 by the Leo Group. Under the leadership of Ben Sowersby, who is also a co-owner, the business has since gone from strength to strength.

With lockdown measures lifted and the Government’s focus now on protecting jobs by getting the economy moving again, Bell Truck and Van continues to play its part. The company has welcomed back all but a handful of the 92 colleagues it furloughed, and reopened all of its sites to visitors, with appropriate social distancing measures in place.

Bell has also just taken on an additional van sales executive and three technicians at Longbenton, and aims to recruit an administrator and another van sales specialist for its Stockton branch, as soon as possible.