Carrier Transicold Selected By CML For 20-Unit Vector® HE 19 Order. 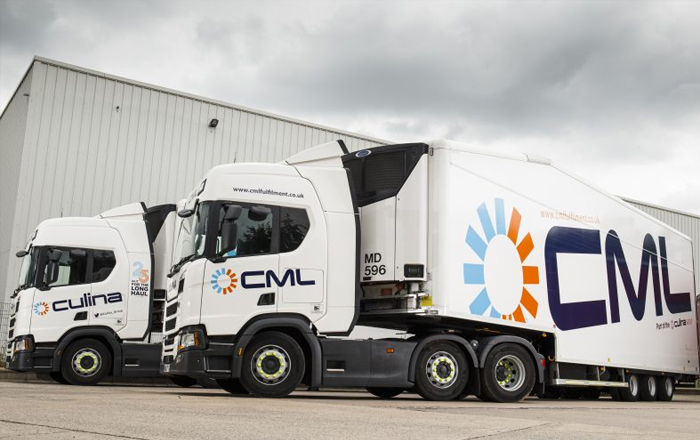 CML Fulfilment & Logistics, a division of the Culina Group, has become one of the latest fleets to take delivery of Carrier Transicold’s new flagship Vector® HE 19 (High Efficiency) trailer refrigeration unit. The system stands out for reducing fuel consumption by up to 30%, weight by 10% and noise by 3 dB(A) – making it significantly quieter in operation than its predecessor. Carrier Transicold is a part of Carrier, a leading global provider of innovative heating, ventilating and air conditioning (HVAC), refrigeration, fire, security and building automation technologies.

The order is for 20 Vector HE 19 units mounted to 13.6-metre Gray & Adams double deck trailers, which will be used for delivering chilled goods to major supermarkets across the UK. Nineteen units join the fleet as part of an ongoing expansion project, with the 20th featuring a special livery commemorating Culina Group’s 25th anniversary.

“Carrier Transicold already provides the cooling systems for around 80% of our fleet, so naturally we were confident the new Vector HE 19 unit would match the high standards we’re used to,” said Mark Matkin, group fleet manager, Culina Group. “The benefits of the new Vector HE 19 unit are huge, both financially and operationally, particularly when you factor in the reduced maintenance requirements.”

With the launch of its next-generation trailer refrigeration system, Carrier Transicold has taken a huge step forward – combining existing, cutting-edge technology with a host of new features to help operators make a step-change improvement in fleet efficiency and sustainability.

Key features include a heavily redesigned evaporator airflow management system that harnesses the Coanda Effect to essentially ‘stick’ cool air to the roof inside the trailer. This creates much more efficient airflow, which is particularly beneficial for double deck operations. Elsewhere, the use of a fully hermetic scroll compressor and economiser helps to deliver a 40% increase in refrigeration capacity during pull-down, while reducing the chance of refrigerant escape in half. The system is also 19% more efficient when plugged into the electrical grid on standby, meaning operators will see reduced diesel, maintenance and electricity bills.

“Whenever we specify new equipment for the fleet, we’re looking to reduce environmental impact as much as possible. As well as improved fuel efficiency and refrigerant containment, one of the first things we noticed with the Vector HE 19 unit was just how quiet it is; it’s ideal for urban deliveries,”

To illustrate the company’s commitment to innovation, the new Vector HE 19 units were mounted to an all new trailer design from Gray & Adams. “Culina has been a valued customer of Gray & Adams since 2001,” said Stuart Martin, sales manager, Gray & Adams. “This made them the perfect candidate for our new 44-pallet, lifting-deck trailer, which we showcased at the CV Show earlier this year featuring Culina’s celebratory 25th anniversary livery. We look forward to more shared successes with both Culina and Carrier Transicold, and to building this important relationship further.”

Culina Group is one of the largest chilled and ambient food and drink warehousing, distribution and transport specialists in the UK and Ireland. It has been specifying Carrier Transicold transport refrigeration systems for more than 15 years. Operating out of the company’s Telford depot, the new double decks will operate on trunking routes across the UK and will be maintained through the Carrier Transicold service partner network.