Green light for a deeper fairway at the Port of Gothenburg 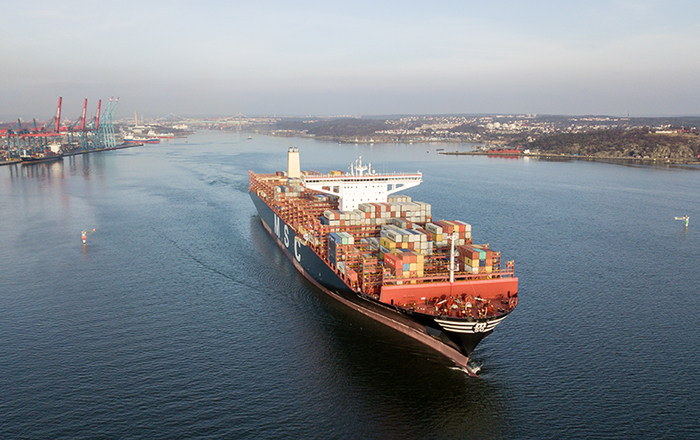 On Thursday (10th September), Gothenburg City Council passed a resolution to grant more than 1,2 billion kronor (€120,000,000) to finance the Skandia Gateway project, which is aimed at deepening the fairway leading into the Port of Gothenburg. The sum was matched by the Swedish Transport Administration as part of the national infrastructure plan, and as a result the project is fully funded. The three parties now have a firm basis for entering into an implementation agreement.

“This is the most important port project in Sweden this century. Gothenburg has been the logistics capital of Scandinavia for 400 years and following this decision it is set to consolidate and build on that position for the next 400 years,” said Elvir Dzanic, Gothenburg Port Authority chief executive.

Direct services to and from the Port of Gothenburg across the oceans of the world without the need for transshipment are vitally important if Swedish companies are to reach global markets in a way that is both climate-friendly and cost-effective. However, as ships continue to grow in size and require a deeper draught, development of the fairway is crucial. At present the very largest ships can only call at the Port of Gothenburg half loaded, and the ships that are required to keep pace with global maritime expansion are becoming bigger by the year.

“This is a race where we need to keep up if we are to maintain our position as a major international port here in Sweden. Without the largest ships the port will be marginalised, forcing many Swedish companies into using inefficient alternatives that are damaging to the environment and with a resulting loss of competitiveness,” said Elvir Dzanic.

Skandia Gateway is a joint project being run by the Gothenburg Port Authority, the Swedish Maritime Administration, and the Swedish Transport Administration. With funding now in place, the three organisations can move forward and enter into an implementation agreement for this much sought-after project.

“I’m extremely pleased. The fact that the government and the city have succeeded in finding a basis for joint funding of Skandia Gateway is an important milestone,” said Jörgen Einarsson, Regional Director of the Swedish Transport Administration Western Region.

1.5 billion cheaper than anticipated According to previous estimates, the cost of deepening the fairway to accommodate ships with a draught of 16.5 metres would be around 4 billion kronor. More detailed calculations now reveal the cost to be around 2.5 billion kronor and achieving a draught of 17.5 metres. The difference can be attributed to the application of more modern construction solutions that emerged during the early stages of the project, coupled with meticulous fairway design optimisation.

“After a number of simulations, we have optimised the layout of the fairway and the dredging requirements. By doing so we have ensured that government funding is being used responsibly,” said Joel Smith, Head of the Swedish Maritime Administration Infrastructure Department.

Deepening the fairway will also be beneficial from a socioeconomic point of view. According to Swedish Transport Administration estimates, each krona invested will produce four kronor in return, with a payback period of just 15 years.

“A further aspect of the project as a whole is the 22,000 people in the Gothenburg region who are directly or indirectly dependent on the Port of Gothenburg for their livelihood. For that reason in particular I’m extremely pleased and relieved that we have been given the green light to press ahead with our plans, which will result in winners on many fronts,” concluded Elvir Dzanic.

The Port of Gothenburg is the only port in Sweden with the capacity to receive the world’s largest container vessels and has the broadest range of shipping routes within and outside Europe. The 25 rail shuttles that depart each day mean that companies throughout Sweden and Norway have a direct, environmentally smart link to the largest port in the Nordic region. The Port of Gothenburg has terminals for oil, cars, ro-ro, containers and passengers.