High-tech Mercedes-Benz Actros ticks all the boxes for Driven by Me. 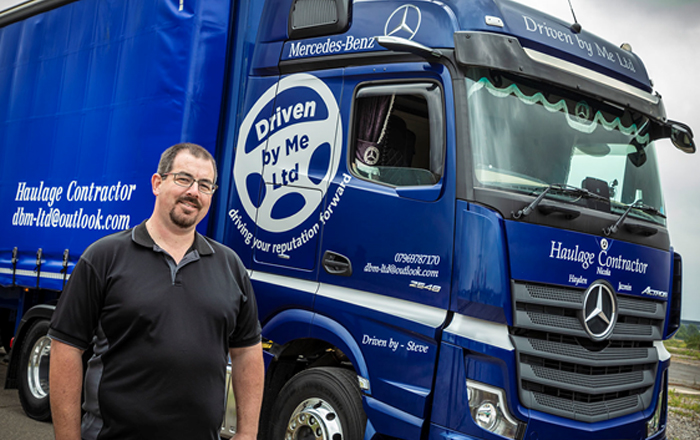 He’s a long-term fan of another truck brand, but Steve Garnier has been blown away by his new Mercedes-Benz, a beautifully presented Actros 2548 BigSpace tractor unit that wears the colours of Avonmouth-based haulier Driven by Me.

Supplied by City West Commercials, the truck is the subject of a Mercedes-Benz Finance contract hire agreement, and has replaced one of the two Approved Used units from the previous Actros model generation which the contractor had been renting from the same Dealer.

A professional driver for 12 years, Steve declared: “I’ve always liked Swedish trucks, but I absolutely love this Mercedes-Benz. It’s beautiful to drive and I get a great night’s sleep. I’m no IT geek but I’ve also found the amazing technology on my Actros very intuitive and easy to use.”

Driven by Me was established in 2015 by proprietor Aaron Vincent, and serves a variety of customers for which it provides nationwide transportation of everything from foods and soft drinks, to insulation products, packaging materials, and timber.

Its new truck is smartly finished in Summer Night Blue metallic paint with colour-coded bumper, and has roof-mounted air horns and Alcoa alloy wheels. The upgraded interactive version of the radical new Multimedia Cockpit boasts a larger, 12in instrument panel and offers extra functionality, such as navigation with Traffic Sign Assist. Other options include ExtraLine lighting, a pull-out refrigerator beneath the bunk, and additional stowage.

Meanwhile, fuel-efficiency from the truck’s 350 kW (476 hp) 12.8-litre ‘straight six’ is enhanced by an optional Economy Package that incorporates air deflectors and tyre pressure monitoring, and two standard-fit items: an improved version of the well-proven Predictive Powertrain Control system, which uses GPS and mapping data to manage gear changes, and the much talked-about MirrorCam system.

Not only do MirrorCam’s cameras boost safety by providing much improved rear visibility and eliminating the blind spots caused by conventional mirrors, but they also cut diesel consumption by approximately 1.5% because their compact and streamlined housings create so much less wind resistance.

Aaron Vincent confirmed: “These are still early days so the fuel performance may get even better as the driveline settles down, but Steve’s Actros is already returning in excess of 10 mpg on a consistent basis. That’s an excellent figure given that he’s running heavy most of the time. It means the new truck is a good half a mile per gallon ahead of his previous Actros, and of the other unit that we also run.”

He continued: “Economy is crucial, of course, but what’s even more important for me is that Steve likes his truck. That’s because a happy driver is also a safe and efficient driver, and really good ones like Steve are hard to come by.

“Any reservations he might have had regarding all of the new technology on the Actros were quickly dispelled when we tried one of City West Commercials’ demonstrators for a couple of weeks, and he’s barely stopped telling me about how good his own truck is since it arrived.”

The new Actros is contracted to cover 140,000 km annually, and Steve, whose cab bears the names of his wife Nicola and children Hayden and Jazmin, is regularly out on the road all week. “A lot of drivers are averse to change but I have no hesitation in describing MirrorCam as brilliant,” he enthused. “The cameras make blind side reversing a lot easier, and you don’t have to contend with the huge blind spots behind your mirrors.

“There’s even a security benefit when you’re not driving – if I’m on my bunk at night I can flick a switch by my head which turns the cameras on, so I can see whether anyone’s poking around the trailer. Mercedes-Benz was first with MirrorCam, but I’ve no doubt that within the next few years every manufacturer will be going down the same route.

“I really like the Multimedia Cockpit too. The twin screens look fantastic, very clean and modern, while it’s nice to have so much useful information – for example relating to the aircon system or tyre pressures – in one place, and all easily accessed from the steering wheel.”

Although Driven by Me’s latest Actros was new, the order was managed by City West Commercials’ Used Truck Sales Specialist Tim Sutcliffe, who supplied the operator’s pre-owned units. “Tim’s been there for us whenever we’ve needed him,” confirmed Aaron Vincent. “He provides a great service and is very responsive if ever we have a query.

“The Dealer’s aftersales support is first class too. We talk to Pete (Stadon) for service bookings and MoTs, and he always manages to get our trucks into the workshop at times that suit us.”