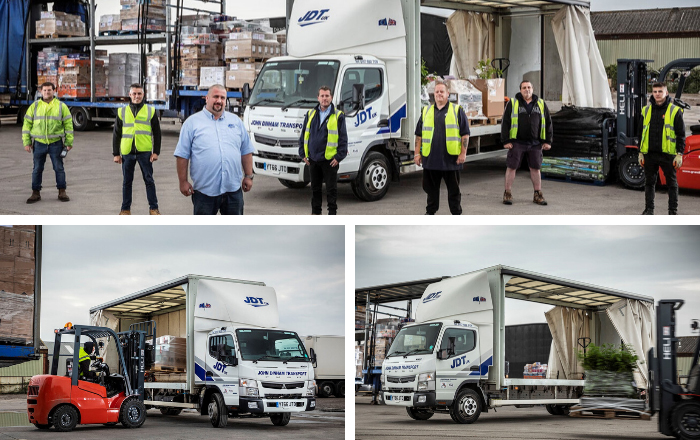 These are exciting times for Mercedes-Benz Approved Used Trucks customer John Dinham Transport, which has just moved to a new base in Avonmouth.

Proprietor John Dinham purchased his first pre-owned vehicle from Dealer City West Commercials in 2016, and has since added another 14.

All are Mercedes-Benz models, with the exception of the latest – a 7.5-tonne FUSO Canter. Despite having a different badge on the front, it, too, is from the Daimler family; the FUSO Canter light truck range is sold and supported by Mercedes-Benz Trucks and its Dealer network in Great Britain.

A 66-registered 7C18 model, the Canter is powered by a 3.0-litre common-rail turbodiesel which produces 129 kW (175 hp) and up to 430 Nm of torque across a broad engine speed range. It works alongside a Mercedes-Benz Axor on the Pall-Ex pallet delivery network contract which John Dinham Transport took up last year.

Though initially reluctant even to try the Canter, Mr Dinham agreed to take the test drive offered by City West Commercials’ Used Truck Sales Specialist Tim Sutcliffe, who has become a trusted supplier. He was so impressed with the experience that he purchased it there and then.

The Canter is proving highly productive, thanks to its market-leading weight-carrying capacity and the compact size that makes it exceptionally agile. “We cover Bristol postcodes for Pall-Ex, and the Canter is ideal for delivering palletised goods in and around the city, as well as heavy consignments for builders’ merchants and the like.

“Ours offers an outstanding payload allowance of approximately 3.8 tonnes, while its tight turning circle is also a huge advantage. It doesn’t carry as much as the 18-tonner, of course, so might have to do two trips for every one by the bigger truck, but the fact that it gets around so much more quickly gives it a big advantage. I’d buy another without hesitation.”

Established by Mr Dinham in 2013 with a single truck which he drove, the company that bears his name now runs 20 vehicles, and puts work the way of sub-contractors as well. Most of the trucks on the John Dinham Transport fleet are Actros tractor units, one of which trunks nightly to the Pall-Ex hub in Coalville, Leicestershire.

Mr Dinham plans to replace four remaining French-built trucks with more by Mercedes-Benz at the first opportunity. “The Actros has been a great asset to the business over the last four years, due to its reliability and low running costs,” he confirmed. “It’s also very popular with our drivers, not least because we choose big, flat-floored cabs, which helps when it comes to retention”.

John Dinham Transport was also kept busy throughout the Covid-19 lockdown period by one of the biggest names in online retailing. At 1.6 acres the operator’s new site offers 50% more space than its previous base, giving it an ideal platform from which to pursue its growth strategy.

Explaining his approach to vehicle acquisitions Mr Dinham said: “We’ve always preferred to buy used rather than new vehicles because they represent such good value for money. That’s particularly so with those we’ve acquired from City West Commercials.”

An Approved Used Mercedes-Benz or FUSO truck is the next best thing to a new one, as all undergo multipoint inspections and are presented to an exceptionally high standard. To qualify for this ‘stamp of quality’ vehicles must be less than seven-years old and have covered fewer than 700,000 km. They also come with a minimum of six months’ MoT and mechanical breakdown insurance cover.

“We maintain our trucks in-house but rely on City West Commercials’ very good parts back-up – only on very rare occasions have they not had the item we’ve needed in stock.

“Tim Sutcliffe, meanwhile, provides a brilliant service. He’ll always go the extra mile to find me the truck I need, and whenever I’ve had an issue, which you’ll always get from time to time with even the best trucks, he’s jumped on it straight away. I’m very glad I took Tim’s advice on the Canter, because it’s proving to be a highly productive addition to the fleet.”