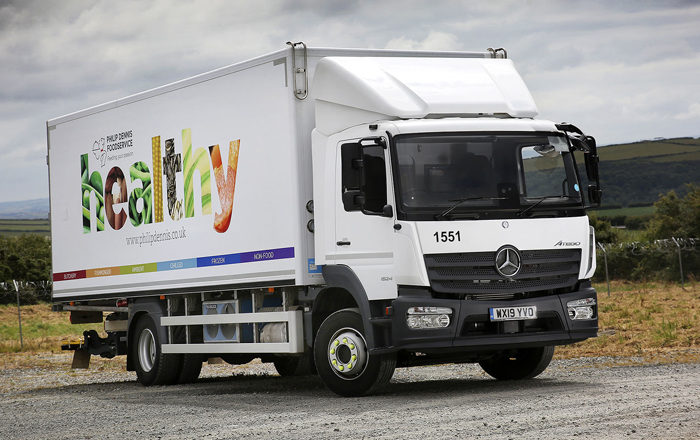 The latest arrivals from Dealer City West Commercials are four 15-tonne 1524 models and a pair of 13-tonne 1324s. They have ClassicSpace S-cabs and are powered by economical, high-torque 7.7-litre straight-six engines which produce 175 kW (238 hp) and drive through six-speed Mercedes PowerShift automated annual transmissions.

Their purpose-designed insulated bodies, meanwhile, are by Solomon Commercials, of Rossendale, Lancashire, which also fitted their Frigoblock multi-temperature refrigeration units.

Philip Dennis Foodservice’s fleet of 75 trucks is dominated by Atego 13- and 15-tonners but also includes a couple of tractor units, both Mercedes-Benz Actros models. One of the rigids has been on the road since 2002, while a further six were registered in 2004, two in 2005, and another four in 2006. Last year the company finally de-commissioned a W-registration Atego which had provided outstanding service since 2000!

A fourth-generation family business whose roots go back more than a century, Philip Dennis Foodservice operates from headquarters in Ilfracombe, and depots in Barnstaple; Witney, Oxfordshire; and Brierly Hill, West Midlands. It supplies customers throughout the South West and Midlands with a comprehensive range of frozen, chilled and ambient foods, while also offering bespoke butchery and fishmongery services.

“This company bought its first Mercedes-Benz Atego more than 20 years ago, and has sworn by them ever since. Uptime is key to the product’s appeal – in terms of reliability, they’re pretty well bomb-proof.

“We run some of these trucks to the ends of their lives, at which point we’ll continue to take spares from them to help keep others on the road. That said, replacement parts for the Atego are certainly competitively priced. We run 11 trucks by another manufacturer and their door mirrors are four times the price of the equivalent Mercedes-Benz item.”

Each of Philip Dennis’s new vehicles will make upwards of 30 deliveries per day to pubs, restaurants and other customers, and cover approximately 40,000 km per year. Mr Palmer has every confidence they will also prove fuel-efficient and cost-effective to operate.

“We bought our first six Atego with Mercedes PowerShift transmissions last year,” he recalled. “All 15-tonners, they’re noticeably more economical – returns are up from the 11 mpg we’re getting from trucks with the previous, manual ’box, to between 12.5 and 13 mpg. With one or two ‘old school’ exceptions, the drivers prefer the autos too, because the system is very smooth and makes life at the wheel so much easier for them.”

Returning to the topic of reliability and durability, he continued:

“Philip Dennis has used a variety of refrigerated bodies in the past, and when we’ve had problems with a vehicle it’s tended to be the box that’s failed, not the truck. That’s why, over the last couple of years, we’ve put new bodies and freezers on a couple of Atego chassis, one of which was first registered in 2008, the other in 2009.

“These days, though, we’re pairing our Mercedes-Benz trucks with bespoke, premium quality bodies and refrigeration systems. The finished vehicles don’t come cheap, but given the length of service we’ll get from them I’ve no doubt they will prove to be wise investments.”