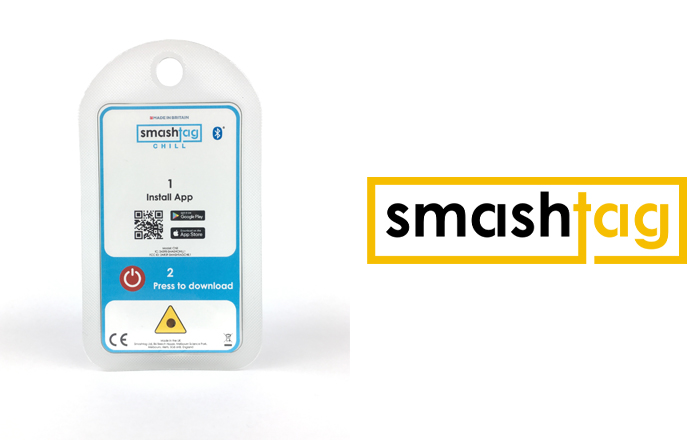 Industrial Internet of Things (IIoT) developer, Smashtag Ltd, has launched a Bluetooth temperature data logger designed for operation by anyone with a smartphone or tablet.

Used in conjunction with the Smashtag Chill app for both Android and iPhone devices, the new data logger monitors the cold chain more easily, quickly and at a lower cost than traditional approaches. Ideal for use in the transport of fresh produce, frozen foods, refined foodstuffs (such as chocolate, wine and cheese) and pharmaceuticals, Smashtag stores data securely in the Cloud and makes it available for authorised users anywhere in the world to access.

Ease Of Use And Sharing Of Data

The state-of-the-art temperature logger could not be simpler to use. To start logging the temperature, users simply press the button on the tag, which can either be attached to a box via its self-adhesive pad or left loose in a container. If, during shipment, the temperature exceeds pre-set limits, the red alarm light will begin to flash. Once the product has arrived at its destination, the recorded temperature data can be downloaded via Bluetooth using the Smashtag app on an Android or iOS device by again pressing the button on the tag. Once downloaded, the temperature data is sent up to the Cloud where it is stored and shared with the appropriate parties.

Matt Sims, MD of Smashtag, said, “The market research we undertook at the beginning of our product development found that a number of companies had boxes full of old USB data loggers that they needed to get rid of and, on further discussion, we were told that a number of them had never been downloaded because they couldn’t get the software to work! Meanwhile, the suppliers who put the loggers in the containers at source complained that they never got the data back from their customers, so it was clear there was a problem we could solve.”

“As almost everybody has a smartphone and wireless networks are everywhere,” explained Matt Sims, “Bluetooth was an obvious technology choice. Being low cost and simple to use, we believe Smashtag will allow more people to acquire temperature data more quickly.” In addition, with Smashtag the cold chain remains unbroken. “Although many refrigerated trucks and containers today are temperature-monitored,” continued Matt Sims, “your product can be moved between vehicles, breaking the chain of data. With a Smashtag within your packaging, you can be sure your product has been kept within the correct temperature range throughout its journey.”

Data security was a key consideration in the design of the new system. “USB devices pose a big security risk,” said Matt Sims. “If someone wanted to hack into your system, installing a virus or malware via a USB device would be a perfect way to do it. The risk is so great that cyber security specialists are starting to advise businesses to avoid using USB devices altogether.” Smashtag temperature data can be downloaded by any phone with the app anywhere in the world, but not everyone is allowed to see it. Once the data is downloaded from the tag, it is sent to the account of the tag’s owner in the Cloud. “Your temperature data being protected is important but more important is making sure Smashtag is not a back door into your company’s wider internal systems,” added Matt Sims.

Smashtag Chill’s casework provides IP67 protection and the device can operate safely in a temperature range of -30˚C to +70˚C. The sensor on the Smashtag is specified to ±0.5°C and the product is CE, FCC and IC approved. Powered by alkaline batteries, there are no restrictions for use in the holds of aircraft and the logger has a minimum operational life of 45 days and a shelf life of 12 months.

Smashtag uses alkaline rather than lithium batteries for environmental and safety reasons and the company also offers recycling as part of its service to customers.