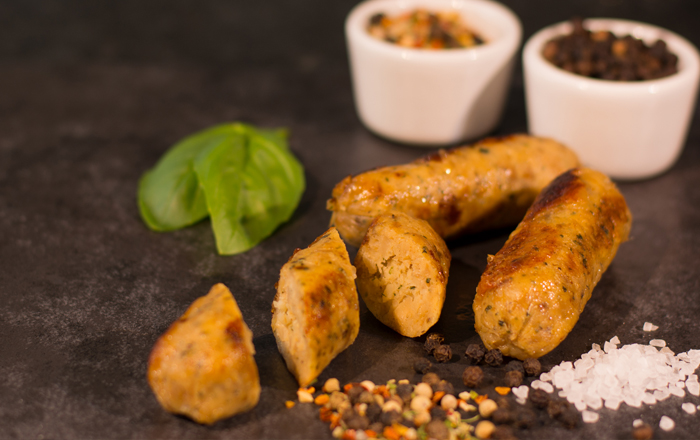 When a vegan mince producer’s demand meant they needed to expand their production facility, the last place you would expect they would look would be a meat producer. But this is exactly what Jay Croslegh from Hooba Foods did, by contacting Holmesterne Farm Co Limited, who have more than 25 years of butchery based production knowledge.

“Hooba Foods started as a small project but we very quickly outgrew our production facility with interest from the food service industry initially. There’s a lot of demand in the market now for vegan products, it’s a growing trend and it’s going to keep growing; so we’ve decided to outsource manufacturing.

“Hooba is effectively a vegan mince, so can be used in all the same ways a traditional meat mince can be. It made sense to link with a meat producer as they have the skill set to make meat products like burgers and sausage”.

Although to some it may have seemed an unusual move to seek out a meat producer, Jay feels it was a logical step. He continues,

“Our ethos isn’t to say you can’t eat meat. The meat-free market is rapidly growing, but the majority of consumers are still meat eaters, so it’s a small part of the market compared to meat eaters.

“Our main audience are actually meat eaters, because we can offer similar products like sausages and burgers. If you want to just lose a bit of weight, our sausages have less than half the calories of standard sausage, so there’s health and environmental reasons for making some alternative options.

“We’d rather educate about the benefits of a plant based diet rather than opposing ourselves to a large meat eating population and this trend is growing.

“We met the team at Holmesterne a year ago. They’d seen the start of this movement for less meat and understood it, and understood the potential in it, as a meat manufacturer they could either ignore it, or embrace it.

“One of the things we had to be very conscious of, when getting involved with a meat manufacturer, is making sure there’s no danger of there being a cross contamination of meat getting into our product.”

This was the challenge for Mark Breeze, Head of Technical at Holmesterne, who, as part of taking on a new product line, needed to try and integrate a new separate production line to their site.

“We’re a compact site and so then had to find a design solution for our current set-up that allowed for the both operations to run smoothly. We’ve worked in meat for years, but saw the trend towards meat-reduced diets and when the opportunity came up to work with Hooba Foods to create meat-free items, we knew it was a great opportunity to widen our offering but still using our expert set of skills.

“It was obvious that we needed additional Cold Storage and Blast Freezing facilities, but it was a brand new product range for us, and held a risk in taking a large financial commitment upfront.

“So we decided to work with Blue Cube PCS to design and provide a solution that worked for us. Blue Cube had already offered us great products, efficiency savings, and service for our meat products, so why would we not approach them again? This meant we could have a completely bespoke solution which was able to be on a rental basis, so meant we avoided the same levels of financial risk.

“It was imperative to have separate solutions for meat and non-meat products whilst still ensuring we’re being as efficient as possible with the challenge of staying within our current site. Lisa at Blue Cube PCS worked with us to design an innovative solution for our needs.”

Lisa Rowbotham, UK Sales Manager at Blue Cube PCS, has 10 years of experience within the cold storage and blast freezing industry, and so immediately started thinking of an innovative design which would meet both customers’ needs.

“The most important thing was to make sure the solution was going to provide complete segregation from both meat and meat free products. We created and built a tailor-made design which meant workers had a separate changing area, production line, and blanch room. In addition, at the single loading bay area we designed a door which seals each section off from one another when it’s moved.”

“Our units now help throughout the entire production line, from keeping the raw materials cool in composition to blast freezing the end product.

“Our fully linked integrated units look as though they’ve always been there, as they join the main building, effectively doubling their existing production facility. We are very pleased we have been able to design and deliver such a great solution for Holmesterne and Hooba Foods.”

The new facility has now meant the future is looking very positive for Holmesterne and Hooba Foods.

“With the use of the expanded production facility and added expertise, we’re looking at a whole range of products now. We do a sausage roll, we’ve presented vegan pork pies, and we’re even looking at vegan scotch eggs. The versatility of this product means that with Holmesterne’s support anything that is mince based we can replicate.

“This summer we’re going to have BBQ products, alongside burgers and sausages, including hot dogs, grilled steaks, kebabs. We’re even looking at diced chicken replacement, or diced beef or pork replacements. We’ve also been approached by a large pizza manufacturer to make a pizza topping.

“There is a drive in the market for these types of products, and so if we can work with the likes of Blue Cube to facilitate the right production solutions, and Holmesterne to develop products to match what the customer wants, utilising the skill sets from the meat industry, it’s something we can do together and drive forward. Together we make a very effective partnership.”

For more information on how Blue Cube PCS could find the right solution for your business please contact [email protected], or call 0333 3202620.