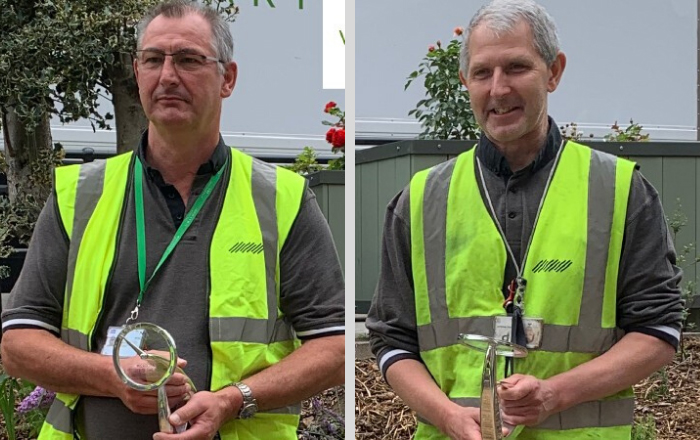 Drivers from Waitrose & Partners have won the Extra Mile and HGV Hero categories in the Microlise Driver of The Year Awards 2020.

With nomination-based awards receiving more entries than ever before and telematics-based categories containing an initial eligible pool of over 225,000 drivers, the 2020 winners are leading lights in the industry, having triumphed after a process of rigorous data analysis, corroboration by employers and assessment by an independent judging panel.

Paul Galbraith from Waitrose & Partners won the hotly contested Extra Mile category. A professional driver for 35 years, Paul delivers groceries to Waitrose stores in the South and South-West of England. According to his managers, Paul will change shifts and drop anything for them if needed and will go the extra mile for any cause that he is involved in. When he is not working – and mentoring and supporting other drivers – Paul is an active member of his local community. He is a volunteer in the local Scout movement and also hosts primary schools visits at his local Bracknell depot to promote a career in logistics and support road safety education.

Paul’s ‘can do’ attitude has an incredibly positive impact on the business and it rubs off on his peers so that new drivers entering the Partnership are encouraged to get the most from their chosen profession.

The Microlise Driver of the Year HGV Hero Award recognises drivers who have gone above and beyond to respond safely, professionally and with great community spirit when faced with potential human tragedy on our roads.

Tim Watson who has been driving for Waitrose & Partners for over seventeen years has been recognised for his outstanding courage. According to the police and the car driver who was involved in the incident, Tim’s actions saved her from significant injury and almost certainly saved her life. The incident happened when a car aquaplaned off the M3, flipped over a barrier and rolled partway down a steep slope where a slender tree held it. With no sign of any vehicles either in front or behind her, the woman found herself trapped in her car and out of sight of the motorway.

Tim was driving about half a mile behind when he thought he saw headlights moving quickly to the left and then rising up into the air. Instead of simply driving past, he drove down the slip road to check for debris; when he found none he scrambled up a dark, steep, muddy and slippery slope in torrential rain and spotted the car. He called emergency services while he talked to the victim, urging her to remain still as he could see that the car was perilously close to becoming dislodged and sliding further down the embankment. Once he had briefed the police, ambulance and fire service he slipped away. The driver of the car subsequently got his details from the police and wrote to Waitrose to highlight the incident and to extend her heartfelt thanks.

According to Chief Executive of Microlise Nadeem Raza, the judges relished their role in finalising the award winners. “The Microlise Driver of the Year Awards uncover fantastic drivers who have stories that highlight the sheer hard work, dedication, bravery and single-minded professionalism that is needed to excel in this industry. This is something we have always championed with our awards initiative recognising the industry’s highest achievers.”

According to Bob Harbey, “The standard of entries was simply outstanding and a true credit to all those nominated. All of our shortlisted drivers could have been worthy winners. Although for many, it has regrettably taken a global crisis to highlight the critical role of drivers, it remains our privilege to take part in recognising the best HGV drivers who perform their role with such commitment and expertise and literally keep our economy moving.”

Driven by safety to provide industry-leading, integrated fleet technology, Microlise is the UK market leader across HGV telematics, with a current installed base of over 500,000 global assets. The company works with many of the transport industry’s leading operators, including 14 of the UK’s largest retailers and with industry heavyweights such as MAN Truck & Bus, Knorr-Bremse and JCB.

Further information on Microlise can be found at www.microlise.com.